The 2017 prize was awarded to Dr. Matteo Iannacone 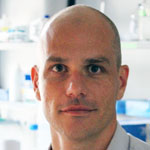 Iannacone has contributed to the field of anti-viral immune responses, lately making magistral use of intra-vital microscopy techniques. He was the first to show that during hepatitis B virus-associated hepatitis, activated platelets are required to recruit virus-specific cytotoxic T lymphocytes into the liver, contributing to disease severity and viral clearance. Later he discovered a previously undetected B cells boosting activities of bisphosphonates. Recently, making magistral use of Intra vital microscopy, his team is focusing in studying the mechanisms that viruses exploit to interfere with adaptive immune responses opening the possibility to design novel, more rational vaccine and therapeutic strategies. Throughout his career, he earned many prestigious awards and grants. He has been involved in the organization of several prestigious international meetings on viral immunity among them the 1st European Molecular Biology Organization (EMBO) Sectoral Meeting on Immunology in Bergamo in 2017. He holds an Armenise-Harvard Foundation Carreer Development award, an EMBO Young Investigator Award, and ERC starting and consolidator grants. He is an Invited Section Editor of Current Opinion in Virology.